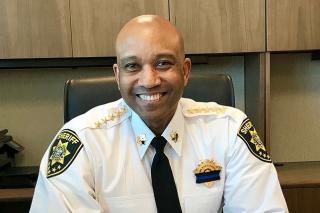 The primary goal of the Intelligence Commanders Committee is to provide sheriff’s departments with timely and accurate intelligence during both times of crisis and periods of normalcy. It will focus on current threats such as foreign and domestic terrorism, human and narcotics trafficking, and cyberattacks. The work of this committee will not be exclusive to sheriff’s departments; it will remain engaged with other law enforcement organizations including the Major City Chiefs Association and federal agency partners.

Sheriff Toulon was chosen to participate in this committee due to his vast background in criminal intelligence, in-custody intelligence, and jail radicalization. He has more than 30 years of criminal-justice experience, heavily centered upon corrections intelligence and combating gang violence. In Suffolk County, Sheriff Toulon is highly focused on using data analytics and technological assets to capture crime patterns --which are used to uncover trends like drug dealing in local neighborhoods and the movement of international gangs encroaching into parts of Suffolk County. Early in his term as Sheriff, he reorganized departments into multi-disciplinary teams focused on corrections intelligence gathering, violent crimes, gang activity and human trafficking.

“I am honored to serve on this committee with my esteemed colleagues from around the country,” said Sheriff Toulon. “It is vitally important that agencies work together, sharing intelligence and information to prevent threats and keep communities safe. We do this in Suffolk County with our partners at the Suffolk County Police Department and the East End Police Departments, and I am looking forward to have these discussions on a national scale.”

Sheriff Toulon is certified through the Department of Homeland Security in Emergency Planning, Radiological Emergency Management, Incident Response to Terrorist Bombing, WMD Threat and Risk Assessment and State Disaster Management. In addition, he is certified to teach courses in weapons of mass destruction awareness, National Incident Management Systems (NIMS), domestic terrorism and hate crimes. He received his Master’s degree in Business Administration and Doctorate in Educational Administration from Dowling College; an advanced certificate in Homeland Security Management from Long Island University, and he attended leadership courses at the JFK School of Government at Harvard University.

About the Major County Sheriffs of America
The Major County Sheriffs of America is a professional law enforcement association of the 108 largest Sheriff's offices representing counties or parishes with a population of 500,000 or more. They are dedicated to preserving the highest integrity in law enforcement and the elected Office of the Sheriff representing over 120 million citizens.