Protecting quality of life on the North Fork: town council candidates on the issues 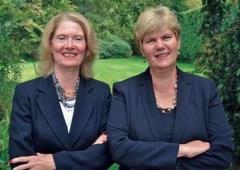 Quality of life on the North Fork was center stage at a community forum featuring candidates for town council and town trustee Saturday morning in Orient.

Questions for council candidates submitted by residents focused on the ever-increasing traffic volume clogging local roadways from spring through late autumn, on the impacts of vineyards and “agritainment” venues on local residents, the proliferation of short-term rentals and “McMansions,” the implications of the shortage of affordable housing, and the environmental impacts of development.

The program was split into three blocks. During the first hour, the four council candidates answered three questions apiece posed by moderators Bob Hanlon, Orient Association president, and Robin Imandt, East Marion Community Association secretary. The questions were submitted by members of the two groups, according to event organizers. A second, shorter session followed the same format for the trustee candidates. A final question-and-answer session provided an opportunity for members of the audience to ask questions of the candidates.

The council candidates — Republican incumbents Bob Ghosio and Jim Dinizio and Democratic challengers Debbie O’Kane and Mary Eisenstein — took turns answering questions read by the moderators — in all three questions per candidate. Each candidate was allotted three minutes to answer his or her question. There was no built-in opportunity for rebuttal by other candidates. In many instances, that structure prompted the candidates to use much of the time allotted for their question — on a new topic — to opine instead about the previous question posed to another person.

Saturday’s forum bore no resemblance to what passes as political “debate” nowadays. The questions were good ones — thoughtful and comprehensive. And so were the answers. Both incumbents and challengers demonstrated an excellent and detailed grasp of the issues. And everyone stuck to the issues, refraining from personal attacks or even pointed criticism.

Incumbent Councilman Bob Ghosio said the often unbearable traffic on local roads — “making it so that for us to get to Riverhead, for example, takes an hour-and-a-half some of these weekends” — is a symptom of the town’s success in preserving open space and an agriculture-based economy.

Ghosio advocates creating centralized “tastefully designed parking facilities” from which visitors can be shuttled by trolley to the North Fork’s various venues. The town is looking into crafting “a code that passes that cost onto the business owners and the farm owners that are creating these bottlenecks.”

Challenger Debbie O’Kane advocated looking at “the big, big picture.” She said the town should not take a piecemeal approach. “We really need to have an integrated public transportation system,” she said.

“We need to be able to take cars off the road so that we’re not sitting for an hour in traffic, so that we’re not afraid to go out of our driveway on a Saturday afternoon. And this is becoming – it’s not just fall – it’s becoming eight or nine months a year now and it’s going to get worse,” O’Kane said.

The candidate, program director for the North Fork Environmental Council, said the town needs to work with a consultant to devise a plan. She said she would “love to contact” the consultant who
worked with local authorities in Maine, where she vacations each summer. “He is a guru. He is amazing,” she said.

“There is an incredible system that’s been devised for Mount Desert Island and Arcadia National Park,” she said. “It has taken a million miles a year off the road,” according to O’Kane.

O’Kane said the town should look into creating a “tourism improvement district” that would assess a dollar per bed per night on visitors staying at local motels and B&Bs.

“An extra dollar per bed per night is not going to be a huge burden on anyone but it could definitely help to put together a pot of money” toward funding a transportation system.

Candidate Mary Eisenstein advocated bringing stakeholders together for a roundtable to develop solutions to the problems posed by the proliferation of short-term rentals. She would invite real estate agents, business owners, civic members and a code enforcement officer to participate.

“We’re in a new economy,” Eisenstein said. AirB&B is not going away, she said. “How do we square property rights and the responsibilities for the community?”

Ghosio, a Republican, pointed out that the Democrats opposed the short-term rental law when it was proposed.

“To me, that’s your private property rights — your right to be able to move into a neighborhood, expect that it’s going to be a neighborhood where you get to know your neighbors, live with your neighbors and be integrated in a community, not where every single weekend there’s somebody elese there, somebody else walking down your right of way to the beach or having parties every weekend,” Ghosio said. “So that’s why we decided to pursue this.”

Ghosio disputed any suggestion that the town has lagged on enforcement of the short-term rental law — which requires a minimum rental period of 14 days.

“Since we passed the law there have been well over 100 complaints,” he said. “Why haven’t all of them resulted in violations and fines being issued? Well, first off, we’ve gotten some compliance and we’ve also gotten a whole group — 63 of those citations and cases are still open and pending. So it’s an ongoing process.”

O’Kane, who was a council candidate in 2015, said Democrats were opposed to the short-term rental law at the time because “we felt very very strongly that we need a permit process. We need a way to generate funds to support code enforcement.”

O’Kane said many people are renting for weekends in spite of the 14-day minimum.

“We need a permit process where we have more oversight and control over whats happening in our community,” she said. O’Kane advocates “a limited number of permits,” which could be allocated on a per-hamlet basis by lottery if necessary due to demand.

Incumbent Dinizio said the town needs to do more code enforcement to deal with short-term rentals. He said code enforcement is a long and difficult process, citing the example of Vineyard 48. The town’s code enforcement division was sent to Vineyard 48, which was shut down by the State Liquor Authority last week — 44 different times between July and October, the councilman said. There are 12 violations pending.

“That’s just for that one place,” he said, “and that would happen every time we violate somebody for an Air B&B.”

Dinizio again spoke of the need for more enforcement in relation to some vineyards that he said have become wedding venues, each hosting more than 20 weddings each season.

Eisenstein, founder and past president of the Mattituck-Laurel Civic Association, advocates allowing more accessory apartments for the provision of affordable housing.

“I believe very strongly in building on what you have and having an accessory apartment is a win-win for both the homeowner in terms of revenue — and perhaps enabling them to stay in their apartment — and … meeting the need for having young people and the aging population who wants to downsize have places to live.”

She also said she sees a lot of opportunity in repurposing vacant commercial space, possibly for affordable housing.

Eisenstein repeatedly returned to her belief that the town needs to finish the master plan, a process which has been ongoing for several years. She advocated several times for holding community roundtables, bringing together the involved segments of the community on any given issue to discuss it and devise solutions to problems. Eisenstein as a civic leader employed this tool for discussion of traffic calming in Mattituck hamlet and for discussion of appropriate development while preserving the area’s agrarian heritage and rural character.

O’Kane said she supports changing the zoning code to reduce the allowable lot coverage on residential properties. The current 20-percent lot coverage allowed creates the opportunity for super-sized “McMansions” that are out of character with existing neighborhoods, she said. She sadi the town should have “a pyramid law” that will allow houses to be “built more like a pyramid rather than straight up and blocking everything else in the neighborhood.”

Dinizio said he does not advocate a town-wide sewer system but believes that community-based advanced wastewater treatment systems of the kind proposed by Peconic Green Growth could be an appropriate solution for communities like Orient, where many homes exist on small lots that directly impact nearby waterways.

Controlling the deer population and tick disease was again a topic of discussion, though nothing new came out of it. There was general agreement that culling the deer herd is a necessity.