By:
The Associated Press
Publication:
Newsday 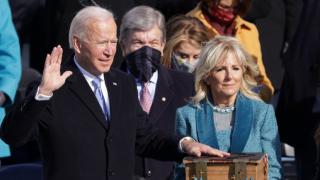 Joe Biden and Kamala Harris were sworn in Wednesday as president and vice president of the United States, taking the helm of a deeply divided nation and inheriting a confluence of crises faced by few of their predecessors.

With Donald Trump absent — he became the first president since 1869 to skip his successor's inauguration — Biden said he would be the president "for all Americans."

"We must end this uncivil war that pits red against blue, rural versus urban, conservative versus liberal," said Biden, a Democrat. "We can do this if we open our souls instead of hardening our hearts."

"Every disagreement doesn't have to be a cause for total war, and we must reject the culture in which facts themselves are manipulated and even manufactured," he added.

Latest updates on the inauguration of Joe Biden
The last outgoing president to snub his successor's inauguration was Andrew Johnson, who didn't attend the swearing-in of Ulysses S. Grant. Earlier, Trump held his own sendoff, telling supporters gathered at Andrews Air Force Base: "Have a nice life. See you soon."

About three hours later, in Biden's inaugural address, the new president paid homage to those lost in the coronavirus pandemic, which has killed 400,000 Americans since February 2020.

He paused for a moment of silent prayer to remember those lost souls.

"Remember all of those who we've lost in this past year to the pandemic — those 400,000 fellow Americans, moms, dads, husbands, wives, sons, daughters, friends, neighbors and coworkers," Biden said. "We will honor them by becoming the people and the nation we know we can, and should, be."

He spoke exactly two weeks after rioters incited by former President Donald Trump attacked the U.S. Capitol while Congress was certifying Biden's electoral win. Biden on Wednesday assailed "a rise of political extremism, white supremacy, domestic terrorism, that we must confront and we will defeat."

Biden's words were a contrast with Trump's four years ago, when the now-former president promised to end "American carnage."

Said Biden: "Together we shall write an American story of hope, not fear, of unity, not division, of light, not darkness. A story of decency and dignity, love and healing, greatness and goodness."

"This is America's day. This is democracy's day, a day of history and hope and renewal and resolve; through a crucible for the ages, America has been tested anew and America has risen to the challenge. Today, we celebrate the triumph not of a candidate but of a cause, the cause of democracy," Biden said.

Harris was sworn into office as vice president by Supreme Court Justice Sonia Sotomayor, just after 11:40 a.m. Harris is the first woman to become vice president.

Harris, until then a U.S. senator from California, is also the first Black person and first person of South Asian descent elected to the vice presidency and is the highest-ranking woman ever to serve in government.

In recognition of health safety protocols in place during to the pandemic, the inauguration lectern was wiped down with disinfecting wipes between speakers and performers such as Lady Gaga, Jennifer Lopez and Garth Brooks.

The nation's youth poet laureate, 22-year-old Amanda Gorman, recited a poem she wrote for the occasion.

The new president and vice president went about the traditional ceremonies — with masks and physical distancing and other changes due to the coronavirus pandemic — that follow the formal swearing in. Early in the afternoon in the U.S. Capitol, Sen. Amy Klobuchar (D-Minn.) presented the Bidens and Harris and her husband with two custom vases of crystal.

"The gifts represent the hope and the faith the American people have placed in you to move our country forward," the senator said.

The inauguration ceremony in which presidential power is transferred, a hallowed American democratic tradition, served as a jarring reminder of the challenges Biden faces: The ceremony unfolded at a U.S. Capitol battered by the rioters, now encircled by security forces evocative of those in a war zone, and devoid of crowds because of the threat of the pandemic.

Stay home, Americans were exhorted, to prevent further spread of the surging virus. Biden looked out over a capital city dotted with empty storefronts that attest to the pandemic’s deep economic toll and racial unrest over the summer.

Former Vice President Mike Pence attended the inauguration but flouting tradition, Trump departed Washington on Wednesday morning rather than accompany his successor to the Capitol. Trump, awaiting his second impeachment trial, had stoked grievance among his supporters with the lie that Biden’s win was illegitimate.

Trump has followed at least one presidential tradition, however.

Trump's White House said the president left behind a note for Biden. Trump's deputy press secretary Judd Deere declined to reveal what the former president wrote to Biden or to characterize the sentiment in the note, citing privacy for communication between presidents.

Biden, in his third run for the presidency, staked his candidacy less on any distinctive political ideology than on galvanizing a broad coalition of voters around the notion that Trump posed an existential threat to American democracy.

On his first day, Biden will take a series of executive actions — on the pandemic, climate, immigration and more — to undo the heart of Trump's agenda. He takes office with the bonds of the republic strained and the nation reeling from challenges that rival those faced by Abraham Lincoln and Franklin D. Roosevelt.

"Biden will face a series of urgent, burning crises like we have not seen before, and they all have to be solved at once. It is very hard to find a parallel in history," said presidential historian Michael Beschloss. "I think we have been through a near-death experience as a democracy. Americans who will watch the new president be sworn in are now acutely aware of how fragile our democracy is and how much it needs to be protected."

Biden came to office with a well of empathy and resolve born by personal tragedy as well as a depth of experience forged from more than four decades in Washington. At age 78, he is the oldest president inaugurated.

Biden and Harris were sworn in during an inauguration ceremony with few parallels in history.

Tens of thousands of troops are on the streets to provide security precisely two weeks after a violent mob of Trump supporters, incited by the president, stormed the Capitol in an attempt to prevent the certification of Biden’s victory.

The tense atmosphere evoked the 1861 inauguration of Lincoln, who was secretly transported to Washington to avoid assassins on the eve of the Civil War, or Roosevelt's inaugural in 1945, when he opted for a small, secure ceremony at the White House in the waning months of World War II.

Despite security warnings, Biden declined to move the ceremony indoors and instead addressed a small, socially distant crowd on the West Front of the Capitol. Some of the traditional trappings of the quadrennial ceremony remained.

The day began with a reach across the aisle after four years of bitter partisan battles under Trump. Biden invited Mitch McConnell (R-Ky.) and Kevin McCarthy (R-Calif.), the Republican leaders of the Senate and House, to join him and Harris at a morning Mass at Washington’s Cathedral of St. Matthew the Apostle. Sen. Chuck Schumer (D-N.Y.) and House Speaker Nancy Pelosi (D-Calif.), the Democratic leaders, also attended.

Biden oversaw a "Pass in Review," a military tradition that honors the peaceful transfer of power to a new commander in chief. Biden, Harris and their spouses were then joined by a bipartisan trio of former presidents — Bill Clinton, George W. Bush and Barack Obama — to lay a wreath at the Tomb of the Unknown Soldier at Arlington National Ceremony.

Later, Biden will join the end of a slimmed-down inaugural parade as he moves into the White House. Because of the pandemic, much of this year's parade will be a virtual affair featuring performances from around the nation.

In the evening, in lieu of the traditional glitzy balls that welcome a new president to Washington, Biden will take part in a televised concert that also marks the return of A-list celebrities to the White House orbit after they largely eschewed Trump. Among those in the lineup: Bruce Springsteen, Justin Timberlake and Lin-Manuel Miranda. Lady Gaga sang the national anthem at the Capitol. Jennifer Lopez and Garth Brooks performed at the inauguration as well.

Trump was the first president in more than a century to skip the inauguration of his successor. He held his own farewell celebration at nearby Joint Base Andrews before boarding Air Force One for the final time as president for the flight to his Florida estate.

Trump’s second impeachment trial could start as early as this week. That could test the ability of the Senate, poised to come under Democratic control, to balance impeachment proceedings with confirmation hearings and votes on Biden’s Cabinet choices.

Biden was eager to go big early, with an ambitious first 100 days that includes a push to speed up the distribution of COVID-19 vaccinations to anxious Americans and pass a $1.9 trillion virus relief package. On day one, he’ll also send an immigration proposal to Capitol Hill that would create an eight-year path to citizenship for immigrants living in the country illegally.

He also planned a 10-day blitz of executive orders on matters that don’t require congressional approval — a mix of substantive and symbolic steps to unwind the Trump years. Among the planned steps: rescinding travel restrictions on people from several predominantly Muslim countries; rejoining the Paris climate accord; issuing a mask mandate for those on federal property; and ordering agencies to figure out how to reunite children separated from their families after crossing the border.

The difficulties he faces are immense, to be mentioned in the same breath as Roosevelt taking office during the Great Depression or Obama, under whom Biden served eight years as vice president, during the economic collapse. And the solution may be similar.

"There is now, as there was in 1933, a vital need for leadership," said presidential historian Doris Kearns Goodwin, "for every national resource to be brought to bear to get the virus under control, to help produce and distribute the vaccines, to get vaccines into the arms of the people, to spur the economy to recover and get people back to work and to school."