Biden Tops Primary Voting; Other Results Will Be Delayed 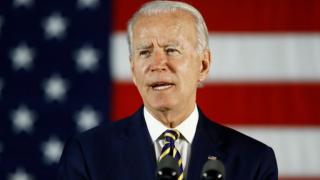 Former Vice President Joe Biden on Tuesday was on his way to adding New York delegates to his campaign for the Democratic nomination for president, but final results in several other congressional and local primaries on Long Island are likely at least a week away.

The Associated Press declared Biden the winner of the New York presidential primary shortly after the polls closed. But there still are 1.8 million absentee ballots statewide to be counted.

Precautions against the spread of the coronavirus are expected to create the first New York state election in which mailed-in absentee ballots will outnumber votes cast at polling places. The results reported Tuesday night by boards of election only include numbers from early voting from June 13 through Sunday as well as those who voted Tuesday at the polls.

By law, absentee ballots can’t be tabulated until July 1 to make sure all the ballots are received by mail. The extensive counting and any challenges to ballots by candidates could mean final results in some races won’t be known for weeks.

In all, more than 135,000 absentee ballots were received by the Nassau and Suffolk boards of elections by midday Tuesday from Long Islanders.

Biden faced no active competition in New York’s presidential primary, in which 320 delegates will be allocated. Ten other candidates who have suspended their campaigns still appeared on the ballot. They could use any delegates they win to try to influence the party’s platform at the nominating convention expected to be held in August.

Five Democrats sought the nomination to represent the 1st State Senate district in Suffolk County which has long been represented by Sen. Kenneth LaValle (R-Port Jefferson), who is retiring. Laura Ahearn, a lawyer and founder of Parents for Megan’s Law, was leading in partial results over Valerie Cartright, a Brookhaven town councilwoman; Tommy John Sciavoni, a Southampton town councilman; Skyler Johnson, a Suffolk County Community College student and activist; and Nora Higgins, a public employee union leader.
In the 3rd Congressional District, Rep. Tom Suozzi (D-Glen Cove) was leading in partial results over Melanie D’Arrigo and Michael Weinstock in a Democratic primary.
In the 5th Congressional District, Rep. Gregory Meeks (D-Queens) was leading in partial results over challenger Shaniyat Chowdhury in a Democratic primary.
In the 4th Congressional District, Cindy Grosz faced Douglas Tuman in a Republican primary for the nomination to challenge Rep. Kathleen Rice (D-Garden City) in November.
In the 2nd State Assembly District primary, Democrats Laura Jens-Smith, a former Riverhead town supervisor, was leading in partial results over William Schleisner, a senior live event coordinator for ViacomCBS.
In the 6th State Senate District, Republican Dennis Dunne Sr. of Levittown, who has served as a Hempstead Town councilman and Nassau County legislator, sought to secure the Libertarian Party endorsement. He faced Jonathan Gunther of Levittown, who works as a FedEx operations administrator and for BestBuy.
Earlier Tuesday, many voters who showed up at the Timber Point Elementary School polling place in East Islip said they came in person because they don’t trust mail-in ballots.

“I don’t believe in absentee ballots,” said Sandy Flandina, 65, who was voting in his first primary as a Republican after switching parties in 2016. “I threw it in the garbage.”

Marck Joseph, 40, was voting for the first time in a primary and felt he was “doing his part” by voting in person.

“As a citizen, each one of us has a part to play and when each of us plays our parts, we can make real change,” Joseph said. “In the crisis we’re having right now with COVID-19 and the social movement going on, I feel it’s my duty and responsibility to come out and make sure I play my part.”

Outside Wyandanch Memorial High School, Bryant King Sr. said he came to vote instead of choosing getting an absentee ballot because he always arrives in person.

At the polling site at Magnolia Gardens in Westbury, where the North Hempstead Housing Authority is located, Dwight Watson, 37, said he had planned vote after work, but heard from his father, Danny Watson, 65, that few people were at the site in the early afternoon.

What compelled Watson to show up Tuesday, he said, was a desire for change in a divided country.

“Just trying to make a difference. Don’t like how the country is going in terms of directions. It’s time for a change,” Watson said. “Protest is OK, but it all starts with voting. That’s all you can do and go from there.”