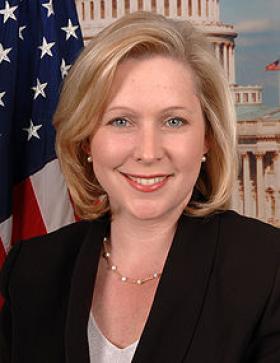 Senator Kirsten Gillibrand is a proud New York Democrat. She is running a grassroots campaign to fix our economy and improve life for the middle class and working families across New York.
Born and raised in upstate New York, Kirsten got her start watching her grandmother, Polly Noonan, organize Albany women to make a difference. Those early experiences taught Kirsten the values that guide her public service to this day: hard work, idealism, honesty and bold action.

Today, Kirsten and her husband, Jonathan, are passing those values on to their two young sons, Theo and Henry. Her family is a major inspiration behind her public service career. She does not want any mother to have to worry that there will not be enough food on the table or health care for their sick child.

Kirsten was first sworn in to the U.S. Senate in January 2009 and was elected in November 2010 with more than 63 percent of the vote to fill Secretary of State Hillary Clinton's seat. In 2012, Kirsten will run once again, this time for a six year term to serve as New York’s US Senator.

Even in the face of steep challenges, Kirsten hit the ground running – leading efforts to bring more transparency and accountability to Washington and helping pass landmark legislation to repeal the “Don’t Ask Don’t Tell” policy that bans gays from serving openly in the military, and provide health care and compensation to the 9/11 first responders and community survivors that are sick with diseases caused by the toxins at Ground Zero.

As senator, she has spent time in every single one of New York’s 62 counties, meeting with families and small businesses, listening to the challenges they are facing. From Brookhaven to the Bronx to Buffalo, the message is clear: New Yorkers want their leaders to find solutions to today's most pressing problems.
That is why Kirsten’s number one priority is to create good-paying jobs across New York. Her plan include cutting taxes for the middle class and small businesses, investing in research and development and renewable energy, and upgrading infrastructure around the state.

Kirsten ran and won her first Congressional campaign in 2006 in order to tackle these pressing issues. She built the biggest grassroots campaign in the district's history and pulled off a stunning upset, unseating an entrenched Republican incumbent.

As congresswoman, Kirsten pledged to be honest, open and upfront with the public and always stay accessible and accountable. That's why she became the very first member of Congress to make her official daily schedule and the participants of every one of her meetings publicly available. She also launched a successful "Congress at Your Corner" series to meet her constituents at hotspots like grocery stores and coffee shops, a practice she has continued as senator.

Kirsten is honored to be a candidate once again in November 2012. Because of her strong New York values and her proven record of accomplishment, she has been endorsed by a wide range of elected officials and civic organizations, including EMILY's List, NARAL, Planned Parenthood, NYSUT, Robert F. Kennedy, Jr., and twenty New York Democrats in Congress.

Kirsten remains committed to bringing her grassroots campaign to every New Yorker and working tirelessly on behalf of the Empire State.