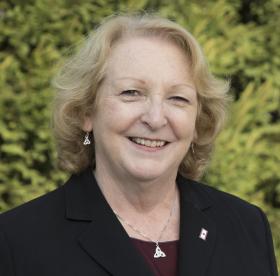 Kate served as a Suffolk County Legislator representing the 3rd district where she fought for Suffolk County’s working families. She successfully controlled spending and held the line on taxes, cracked down on illegal housing and made protecting our precious environment a focus.

Before taking office, Kate worked as a school bus driver for the William Floyd School District in order to make ends meet and have the same hours as her children while they attended school. She and her husband, Steve, are the proud parents of Aoife, Sean, and Aodhan and their three grandchildren.

Kate was born and raised in war-torn Belfast, Northern Ireland, during “The Troubles”. At 19, she left Belfast for Germany, where she met Steve, who was serving in the U.S. military and went on to work for the NYPD. In 1989, she and her husband settled in Shirley, New York.

Kate is proud of her husband and her sons, Sean and Aodhan, who are serving their country in the military. Steve is a decorated Detective in New York City Police Department and retired from the Army National Guard in 2006. Sean and Aodhan serve in the Air National Guard, 106th Air Rescue Wing, Westhampton and Sean has served three tours in Afghanistan. Kate avidly supports our service members overseas and their families here at home.

Browning graduated with a Bachelor’s Degree from National Labor College.