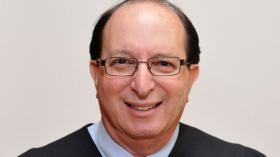 Judge Knobel was elected to the Nassau County District Court in November, 2005. He is assigned to hear and determine civil cases exclusively from their commencement to their conclusion; he also periodically conducts arraignments. The average daily civil caseload consists of at least 20 motions and 10 trials. Judge Knobel has had several opinions published in the official reporter and the New York Law Journal. He has taught New York Civil Procedure at Hofstra Law since 2003.

For the past 16 years, Judge Knobel has delivered food every Monday to senior citizens of behalf of Island Harvest.

Judge Knobel is married to Ilene Fern, law clerk to the Honorable Martin Schulman, Supreme Court, Queens County, and has two beautiful children: Laurence, who graduated from Hofstra [as an undergrad] in January, hopes to attend the sports management MBA program at Hofstra and is presently a visiting team batboy for the New York Mets, and Lily, who will be 5 years old in November and knows the lyrics to “Mamma Mia,” and “Dancing in the Dark” and “Surprise, Surprise” by Bruce Springsteen and the E Street Band. Judge Knobel loves baseball, the New York Yankees and the E Street Band, and reluctantly roots for the New York Mets.